There is a place in Africa where the wound of a great rupture promises abundant life in its healing. It is a place of brooding mountains, of Great Plains and whispering lakes - a place that attracts a diversity of life to its wonders - and it was once believed to be the place of the birthplace of consciousness in mankind. Eight lakes make up the Kenya Rift Valley Lake system, two of which are freshwater and the rest alkaline. The large flocks of flamingoes for which the Kenyan lakes have become famous are found on the alkaline soda lakes feeding on tiny crustaceans

If you are looking for a tour in Kenya off the usuall tourist tracks this 14 days trip would be the right one for you.

Day 1 Arrival in Nairobi
We pick you up at the International Airport in Nairobi and accompany you to the hotel. Spend the rest of the day  relaxing and getting ready to start your Africa adventure. 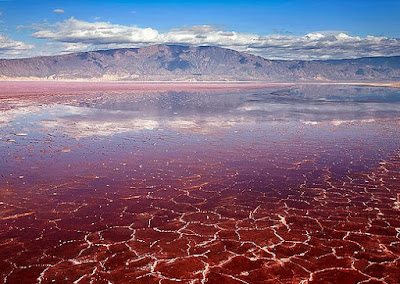 Day 2 - Lake Magadi (Lake Soda)
Your safari starts at Magadi Lake. It is the southernmost of the great lakes of Kenya and is located 80 km from Nairobi. We will pick you up at the hotel in Nairobi after breakfast and drive towards the Tanzanian border: past the famous Ngong mountains (also known as the film "Beyond Africa") into the Great Riftvalley. Enroute is Olorgesaille one of the most famous archaeological sites in East Africa where archeologists Louis and Mary Leakey discovered not only the fossils of the early methods of man, but also the world's largest collection of fist wedges and hand axes. Accompanied by your guide tour the prehistoric site and learn how the early hominids have developed in the savannahs of Africa and why their fossil remains have been preserved over millions of years in the sediment of the lakes. Afterwards drive to Magadi and have lunch picnics at the hot springs of Soda ash. On the lakeside you will experience flamingo colonies, pelicans, goshawk and other water birds. Then cross the lake on the road to Ol 'Kiramatian and learn how the salt mixtures are mined at the lake. On the other side, you climb up the adjoining mountain slopes on Magadi Lake. From above you can enjoy a fantastic view of the entire lake and parts of the moat and walk along the rocky slopes. Our local guide is part of the Maasai tribe and will tell us about the traditions and ways of life of the local Masai people. In the late afternoon, return to Nairobi. 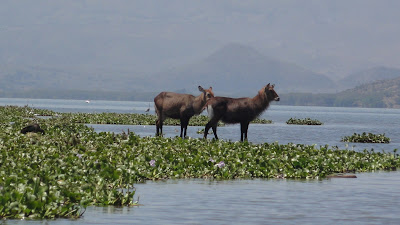 Day 3: Lake Naivasha
Today you drive to Naivasha, the 2nd Rift Valley Lake on your tour, where you will be taken to Crescent Island. The tour usually takes 2 hours and you can explore both the lake and the island with all the birds and animals. Once you arrive at the island, you will meet the guide near the pier. Your guide will show you the best animals: giraffes, hippos, Grant's gazelles, the fox and maybe even the rare pythons. The boat will take you back to Lake Naivasha Country Club, where you will have lunch. The rest of the day is at leisure. 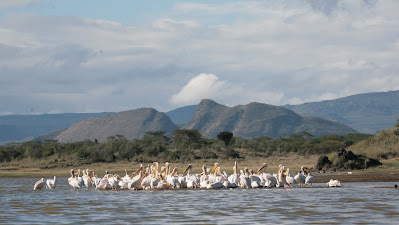 Day 4: Lake Elementaita
Today you will continue to Lake Elementaita where you will take a hike to "Sleeping Warrior", a hill that has the profile of a sleeping Maasai warrior. On the shore you can watch pelicans. 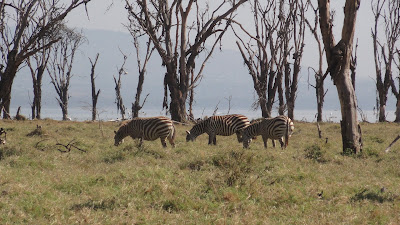 Day 5: Lake Nakuru National Park
If you want, you can watch birds again at the early morning at the lakeside. After breakfast, we continue to Lake Nakuru National Park. In the afternoon you will be on a game drive. The Lake Nakuru National Park was created to protect the huge flamingo population. On the bank, waterbucks, Bohor-Reedbuck and zebras wander around grazing. Lake Nakuru is home to the black and white rhinoceros, In 1987 only two black rhinoceroses had remained because of devastating effects of poaching. By establishing a rhinoceros protected area within the park and crossing with a breeder from Laikipia, the Kenya Wildlife Service (K.W.S.) succeeded in multiplying rhinoceros successfully in the park. Wild observation is relatively easy and will be possible until sunset. Buffalo, Leopard, Lion, Rothschild giraffe, Colobus can be found in the forest. Day 6: Lake Bogoria/Baringo
Lake Bogoria National Reserves is 107 km² in size. Here you can find hot springs and geysers in the once wild and repellent landscape, which is permeated by dark lava rocks. Or you can observe the masses of flamingos at Lake Bogoria, which move in a row, while the head of the algae is beaked with the head down. There are also bee-eaters, kingfishers, rhino-birds and many other bird species among the feathered inhabitants. There are also some mammals, such as the large herds of the Great Kudus, an antelope that is otherwise very rare in East Africa, but also buffaloes, zebras, dik-diks, impalas, warthogs, sea cats and baboons. 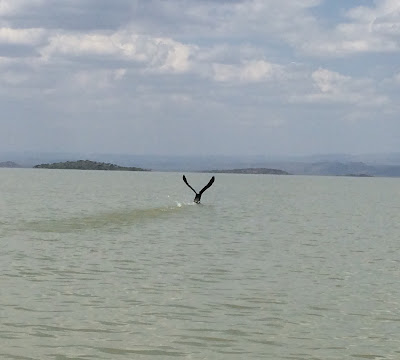 Day 7: Lake Baringo
After breakfast you will have beautiful views of the lake and the islands in the changing light of the sunrise. Lake Baringo is the second freshwater lake in the Rift valley after Lake Naivasha and is the highest at 970 m above sea level. There are over 450 species of birds in and around the lake area. Crocodiles and hippos are also frequently spotted with the latter coming out at night in many places to graze ashore. Here is one of the best places to photograph Squacco heron, Goliath heron and purple heron. On the lake are local fishermen who paddle around in their balsa wood boats and fish Tilapia. Perhaps you would like to experience a special spectacle and buy a fish from one of the fishermen, then look out for African fish Eagles, which are usually found in pairs on the banks and on the islands. When you have tracked the big birds, the fisherman will raise the fish from the boat - and the fish eagle will try to catch the fish. 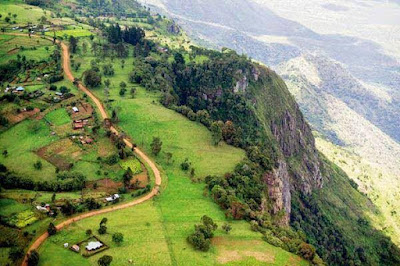 Day 8: Iten
Today you drive over the Rift to Kabernet and continue to the Chebloch Gorge, where you can linger and watch cliff jumpers. Drive through the Kerio Valley through breathtaking landscapes and traditional Pokot villages to the Rimoi Nation Reserve, where you can observe elephants migrating between Turkana and Kerio Valley. From here, we continue uphill to Iten, the city of marathon runners. At the Kerio View Hotel you have a breathtaking view over the valley and can even paraglide. 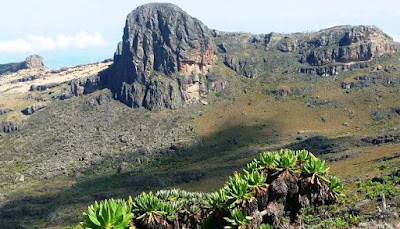 Day 9: Kitale
Continue your journey north to Kitale at the foot of Mt. Elgon. You can visit the mountain or participate in a coffee tasting at the Cranes Camp, which has its own coffee. 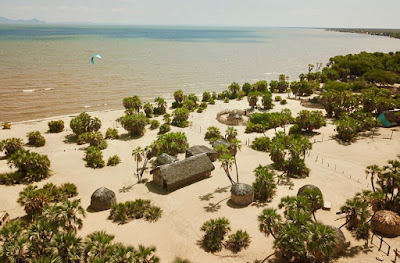 Day 10: Lake Turkana
In the morning leave for the Airstrip for your flight to Lodwar. There we take you from the airfield and drive directly to Eliye Springs on the shores of Lake Turkana (approximately one hour). The largest desert lake in the world is considered the cradle of mankind because archaeologists discovered some of the most spectacular and ancient hominid remains. At the Eliye Springs Resort you will find the Boma, a hotel banda, which is modeled after the traditional straw huts of Turkana, the local tribe. Get familiar with your hotel, enjoy the first hours at the beach. In the late afternoon, visit the nearby fishing village of Longelech and learn how the Turkana operate traditional "shore" -fishing, river fishing. The fishermen prepare freshly caught fish on request at the beach. 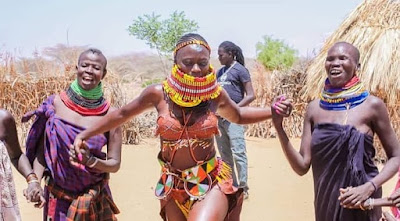 Day 11: Day trip to Nariokotome, Turkana boy's excavation
After breakfast, you will drive with the jeep to the north of the lake. On the sand slopes you will travel through nomads to Kalokol, the center of the Turkana fishermen on the lake. In the bay of Kalokol, Nile perches and tilapias spawn,walk through one of the traditional villages of Turkana. Visit a boma and learn how the Turkana make their diverse body jewelry and experience the way of life of the nomads. In Nariokotome you visit the old Spanish mission station with its gardens and plants. Many of the locals still speak Spanish. Therefore Nariokotome is also paraphrased as "Little Spain", The place, however, gained its fame only by the paleoanthropologist Richard Leakey. The team discovered the almost complete skeleton of a 1.6 million-year-old prehistoric species Homo erectus in the Nariokotome river in 1984 near the lake shore. The bone remnants came from a boy about nine years old. Visit the monument with the replica of the Turkana boy and visit the excavation site. 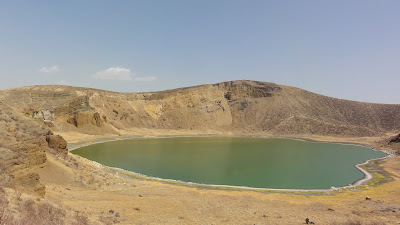 Day 12: Day trip to National Park Central Island
In the middle of Lake Turkana there are three islands of volcanic origin. After breakfast, take a motorboat across to the middle island. Central Iceland is designated as a national park. The three crater lakes on the island "Crocodile Lake", "Flamingo Lake" and "Tilapia Lake" are the most important breeding grounds of Crocodylus niloticus, the Nile Crocodile, walk between the crater lakes and discover the island. 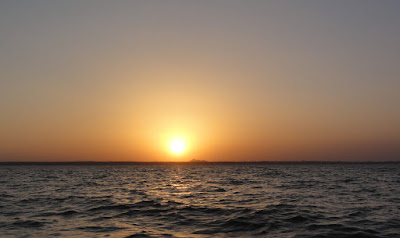 Day 13: Beach Day and Sundowner
On the last day you can enjoy beach, lake and sun. On request, guests can enjoy a massage at the resort or a fishing trip. In the afternoon you will go to the last highlight of your trip- a boat trip with a Sundowner. 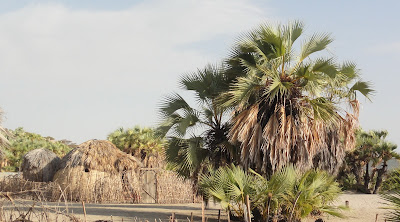 Day 14: Return to Nairobi
Transfer to Lodwar to the Airstripfor your return flight to Nairobi.