Best of Kenya in 12 days - the ultimate safari itinerary

With this post we would like to give you an idea what to expirience whil visiting Kenya. This 12 days itinerary is covering the best wildlife spots in Kenya and gives you a very high chance to see the Big five.
Day 1: NAIROBI / SAMBURU
You will start the safari from Nairobi to the Samburu Game Reserve, home to a number of species north of the equator, in the land of the colorful Samburu, the close relatives of the Maasai. It offers a unique view of rounded and rugged hills and undulating plains. The mix of wood and grassland with the alluvial forest and wetlands is home to a variety of animals and birds. Lunch is served at the lodge, and later in the afternoon, you go on an observatory until sunset.

Day 2: SAMBURU
Spend the day in the National Reserve with unforgettable impressions of game viewing. The relief Samburu's comes from the Ewaso Ng'iro River, which rises at the foothills of the Aberdares a few hundred kilometers to the west and disappears over Samburu in the recess of the Lorian swamp. The birdlife is very diverse with more than 380 recorded species and you can also see giraffes, Grevy's zebras, elephants, oryx, Somalis, hippos, crocodiles, giraffes, buffaloes, lions, leopards, cheetahs and hyenas. The long-necked giraffe gazelle is a graceful antelope that has adapted to the savannah and covers its water needs solely through food intake. 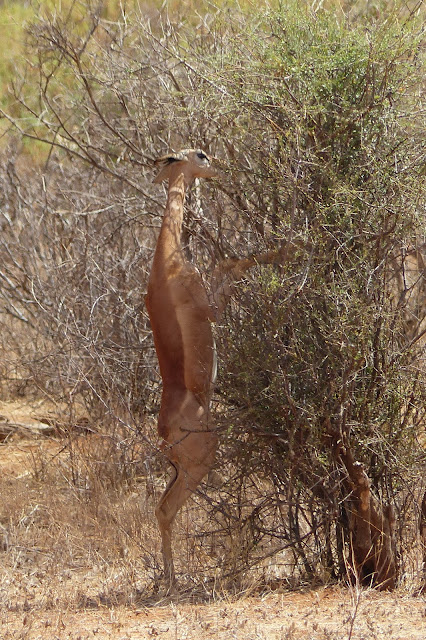 Day 3: SAMBURU / OL PEJETA
After breakfast, drive to Ol Pejeta Conservancy, a beautiful private game reserve and home to rare species such as Beisa oryx, Rothschild's giraffe and black rhino. On the game drive, Africa shows you the whole range of African wildlife such as lions, leopards, cheetahs, elephants and hippos. Visit the chimpanzees from the Jane Goodall Institute at Sweetwaters Chimpanzee Sanctuary. Other optional activities include bird walks, where you can observe several hundred species, horseback riding and camel riding. 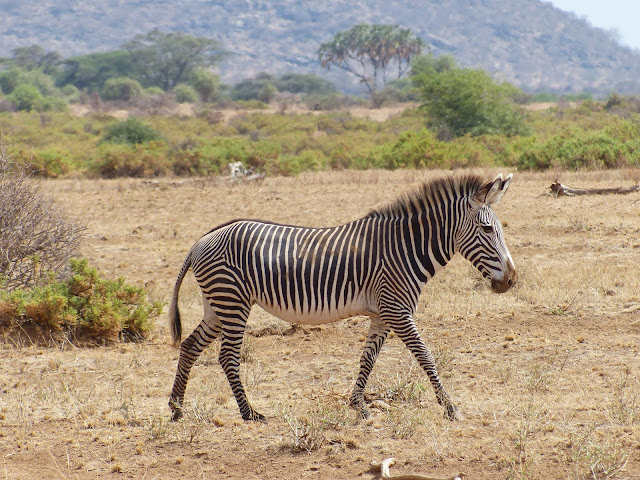 Day 4: OL PEJETA / LAKE NAKURU
After breakfast, cross the Equator heading south and meet Thomsen Falls for lunch before driving down the Rift Valley to Lake Nakuru. Lake Nakuru National Park was built to protect the giant flamingo swarms. With over 1 million flamingos, the shore of the lake is pink. Watch the remarkable game of hippos and clawless otters in the lake. Waterbucks, bohor reedbucks and zebras roam the grazing on the shore. The woodland and the forest are today the home of black and white rhinoceros. In 1987, only two black rhinos remained due to the devastating effects of poaching. By establishing a rhino sanctuary within the park and crossing it with a breeding herd from Laikipia, the Kenya Wildlife Service (K.W.S.) has succeeded in multiplying rhinos again successfully in the park. Wildlife watching is relatively easy and will be possible until sunset. Buffalo, leopard, lion, red-shielded giraffe, colobus monkeys are plentiful in the forest. In the scrubland you will find Eland antelope, ibex, impala, Chandler reedbuck and dikdiks, while rock hyrax and cliff-diver can be found on the cliffs and embankments. Another highlight of the park is the Euphorbia forest - the largest in Africa. 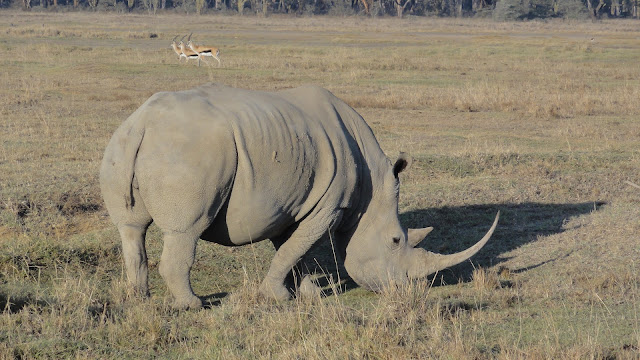 Day 5: NAKURU / MAASAI MARA
After breakfast, leave Nakuru and drive to the Maasai Mara Game Reserve, the "spotted plain" according to the Maa language. This is home to the largest concentration of large mammals and is widely recognized as Africa's ultimate conservation area. The park is the northern continuation of the vast Serengeti - Mara ecosystem, famous for its annual wildebeest migration. You will arrive at your lodge for lunch. Afternoon game drive to sunset at this spectacular location with breathtaking scenery, endless plains and the widest variety of wildlife. The landscape consists of gentle savannahs with spotted shrubs and bush thickets, which makes them look like dotted. 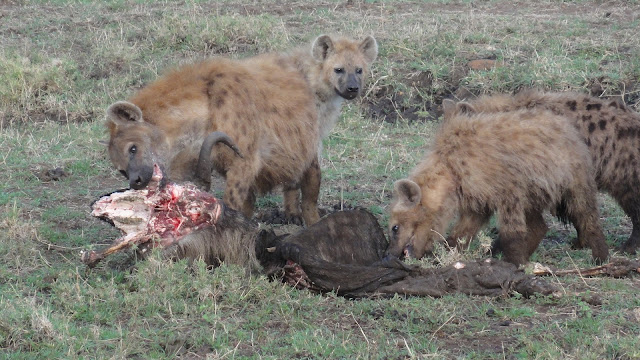 Day 6: MAASAI MARA
Today you have the opportunity to explore this great reserve in its depth. You will see elephants, giraffes, packs of lions, and thousands of impalas, topi, and thomson glands. Birds are also very diverse, including migratory birds more than 450 species of birds, including 57 birds of prey, are counted. The Mara is the scene of the annual migration of millions of wildebeests from the Serengeti Plains in search of water and grasses. During your stay in the Mara you will have the opportunity to float above the Mara - Serengeti Ecosystem aboard a hot air balloon, followed by a gourmet champagne breakfast. You can also visit a Maasai village and enjoy Maasei dances entertainment. 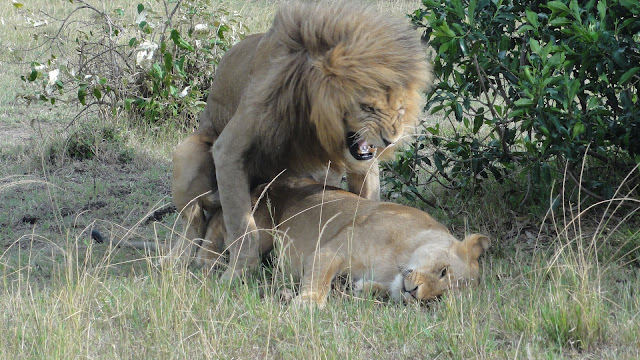 Day 7: MAASAI MARA / NAIROBI
Today you drive back to Nairobi to continue your tour south. Time permitting, take a city tour or drive past Giraffe Center and feed the red-shielded giraffes. Day 8: NAIROBI/ AMBOSELI
After an early breakfast we will drive from the Plains to the Amboseli National Park. The park is known for its landscape dominated by Mount Kilimanjaro. It offers an interesting contrast with its dry and dusty appearance, which can be attributed to the volcanic ash that came out of Kilimanjaro when it last erupted. Despite the dusty appearance, there is a continuous supply of water through Kilimanjaro melted snow, filtered through the volcanic rocks. 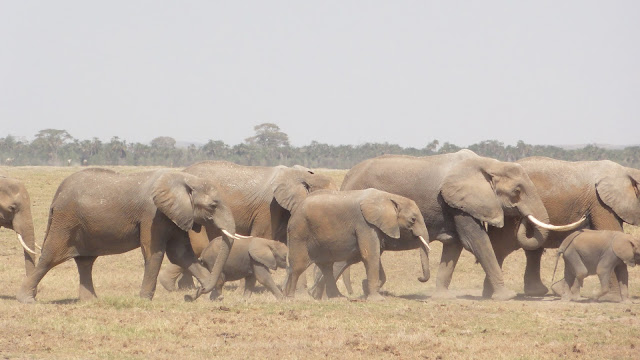 Day 9: AMBOSELI
Spend another day in the park with game viewing in the morning and afternoon. These include zebras, gnus, giraffes, impala, caracal and serval, lions, leopards, cheetahs, buffaloes. There are also more than 400 species of birds, including the bee-eater, kingfisher, African osprey, martial eagle and pygmy hawk. The visitors come especially to observe the huge elephant herds. The bull elephants have some of the largest tusks in Kenya. You can also enjoy excellent views of Mount Kilimanjaro and Mount Meru. 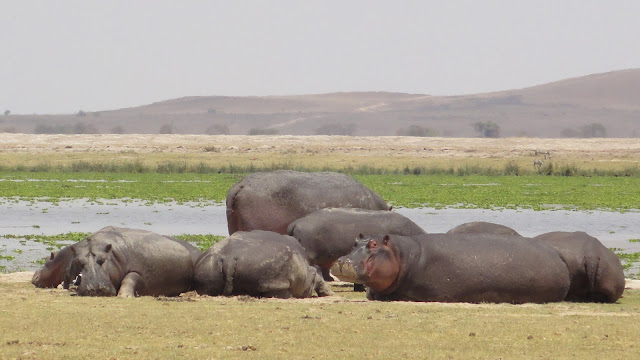 Day 10: AMBOSELI / TSAVO WEST
Departure through the Chyulu Hills in the second largest park Tsavo West, known by the "Ogres Lion". During the railway construction from Mombasa to Uganda they attacked the workers. The story was filmed with "The Man and the Dark". They arrive at the lodge for lunch and later set off for an afternoon game drive. The park offers habitats in mountains, rivers, forests and lakes. It is well suited for walking safaris with a number of nature trails and the opportunity to explore the Chaimu volcanic lava. Day 11: TSAVO WEST
You spend another day in Tsavo West and can go on a walking safari and learn a lot about the park. You will also visit the Mzima Springs, a geological phenomenon and a natural wonder, because every day about 230 million liters of water gush out of the dry lava plain. A small attraction is a glass-walled shelter built into the lake that provides stunning insights into the diverse underwater world. Since the water is very clear, you can see hippos running on the bottom and, if you are lucky, you can see crocodiles. 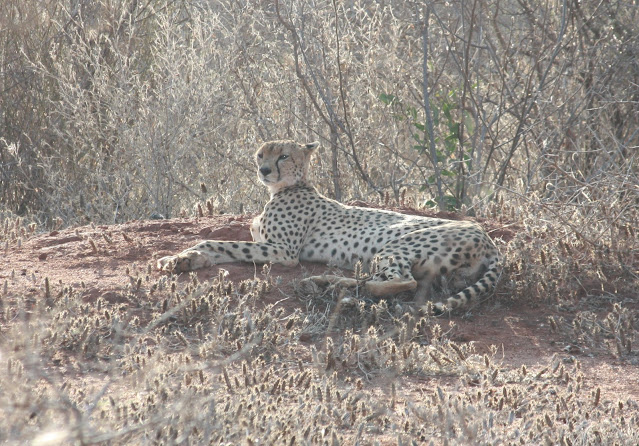 Day 12: TSAVO / NAIROBI
After breakfast, drive through the park back to Nairobi.

For quotations and other travel ideas write to info@adventureandexpeditions.com. 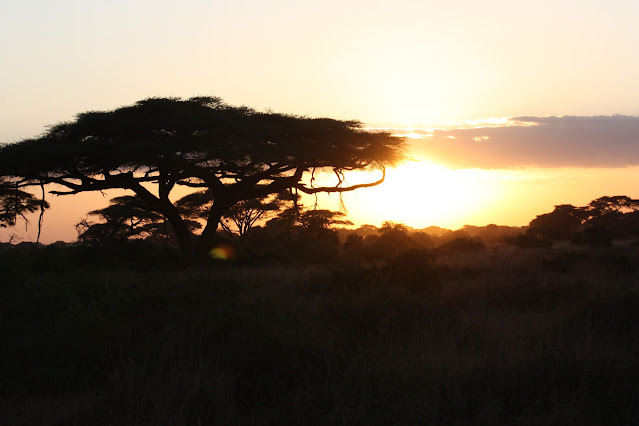