The West African black rhino having lived alongside men for centuries it assumed man was harmless. Having existed for 8 million years, by the 1900s there were 850,000 of its kind which made it the most prolific species of rhino on the planet. 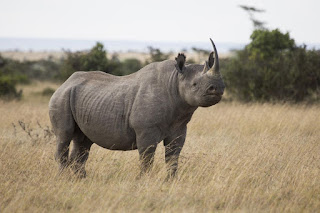 Between 1971 and 1993 a number of them were massacred and at some point they were believed to be extinct and this was actually declared true back in 2011.
The white rhino until October 2019, was feared that it too would walk the plank of extinction but thanks to a group of dedicated scientists, not ready to let these amazing species disappear on the face of the earth, on the Kenyan conservancy, Ol Pejeta. 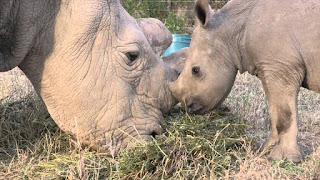 The last three white rhinos on the planet lived out a gilded existence in their own private wilderness enclosure in the shadows of Mount Kenya, guarded day and night. The trio was originally reared in the Czech Republic in a zoo but in 2009, Sudan,his daughter Natu and his granddaughter Fatu were relocated to Ol Pejeta in the hope that the conducive environment would encourage breeding.
Unfortunately, Sudan died in 2018.The last male white rhino! Luckily, scientists had harvested Sudan’s semen and last year they were able to harvest eggs from Natu and Fatu. These eggs will be artificially inseminated with Sudan’s frozen sperm, and in the near future transferred to a southern white rhino in an attempt to save these amazing animals.