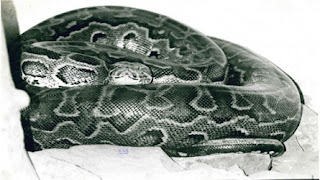 Omieri, is a snake rooted in Luo myths, a snake that lives in Lake Victoria and appears on land in times of drought to summon the rains.

In 1987, a massive python appeared in Nyakach, near a woman’s home. The Nyakach people immediately recognized the good luck charm and hoped that the snake would bring rain to the dry land.. Everyone loved her. The children reportedly massaged her beautiful black and tan back while men and women would lavish bread and Ugali on her. Some even left prized young goats and chicken unattended for her to pick up. An MP would insist she was a star attraction.
People came from far and wide to see the snake including international tourists. The Kenya Wildlife Service was concerned about the whereabouts of the snake and rightfully so.


Sometime later, a villager burnt the grass surrounding the snake in a bid to show visitors its whereabouts at night, the snake got burnt and sustained injuries and was transferred to the animal orphanage in Nairobi for treatment and recovery. The Nyakach water supply and a local road have had serious problems since Omieri went to an orphanage in Nairobi. Worried residents soon called for her return “home”.  They wrote to KWS: “Omieri is our gift from God, given through our ancestors’ spirits to bring good tidings. We hope to get a good harvest, rainfall and a good omen after seeing our serpent. We beseech you to hear our cries and return our snake before we face untold suffering and a curse from our ancestors.”

Omieri was moved back to Kisumu where she died. She was given a proper burial, with a condolence book placed at the Kariokor Social Hall.
But she reappeared again…

In 2003, a 16 foot long python appeared in Wasare, Nyakach. The snake had come to the marshes to lay eggs. Residents gave it all manner or food to eat including Ugali, bread and goats. Although the snake rarely ate, the residents continued to revere it. The snake had security from the Kenya Wildlife Service and local youth, to ensure that no harm came to it. It is not clear what happened to the snake, it probably moved away from the area after some time.
In February 2006, a python appeared in Kano, another area of Nyakach. Residents of the area celebrated its sighting as a sign of good luck as there had been a long spell of drought. It is unclear whether there was any rainfall or good luck that was associated with the sighting of the snake.

By now it should be pretty obvious to you that Omieri is not one snake, but a type of snake. Any fully developed python, which appears in the vicinity of the Nyakach area especially near the lake, will probably be labeled as Omieri.


And so Omieri lives on. A tale ever so fascinating! 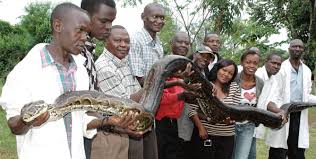