Visit Kenya, Zimbabwe/Zambia and South Africa in 10 days. Kenya Airways has added a new destination to its network and flies to Cape Town, South Africa.  There are six weekly flights between Nairobi and Cape Town, three with stop over in Victoria Falls and three with stop over in Livingston. This offers a nice tour through some African Highlights. You can have a an unforgetable safari in the well-known Maasai Mara. From there you can see the amazing Victoria Falls and end up your holiday at the Cape with his beautiful landscape and grapes.

We created already a tour package for our travelers:


Maasai Mara Game Reserve, so named to mean the “spotted plains” in Maa language. This is home to the greatest concentration of large mammals and is widely recognized as Africa’s ultimate wildlife reserve. The park is the northern extension to the vast Serengeti-Mara ecosystem, famous for its annual migration of wildebeest.
itinerary:
Transfer to the lodge with a game drive en route and lunch. Later in the evening enjoy a game viewing drive in this spectacular place of breath-taking sceneries, never-ending plains and the most abundant variety of wildlife remaining anywhere in the world. The landscape is made up of rolling savannahs dotted with patchy shrubs and bush thickets.
During your stay, you have the opportunity to explore this great reserve in depth. You may see elephant, giraffe, prides of lion, and thousands of impala, topi, grants and Thomson's gazelle. Birds are prolific including immigrants, 450 bird species have been recorded among them 57 birds of prey.

Spend the night in Nairobi to catch the flight the next day.
Flight from Nairobi to Victoria Falls International Airport in Zimbabwe. (NOT INCLUDED BOOK WITH INTERNATIONAL FLIGHT)

This falls found between Zambia and Zimbabwe has several names depending on the conquering force. David Livingstone, the first white man to see this falls named it Victoria Falls, while the Lozi, a tribe that migrated from South Africa called it Mosi-oa-TunyaWhile it is neither the highest nor the widest waterfall in the world, Victoria Falls is classified as the largest, based on its combined width of 1,708 meters and height of 108 meters, resulting in the world's largest sheet of falling water. Victoria Falls is roughly twice the height of North America's Niagara Falls and well over twice the width of its Horseshoe Falls. In height and width Victoria Falls is rivaled only by Argentina and Brazil's Iguazu Falls.
You will be welcomed at the airport by one of our local representative and driven to the Victoria Falls Safari Lodge.
Voted "Best Safari Lodge" in Zimbabwe for 17 consecutive years and listed on Conde Nast Travellers Gold List, the Victoria Falls Safari Lodge is a place of legend. Set high on a natural plateau, the westward facing Lodge borders the Zambezi National Park and is just 4 kilometres from the thundering Victoria Falls, Southern Africa's foremost attraction. Enjoying uninterrupted views of spectacular African sunsets and year round game at its on-site waterhole, the Lodge is ideally positioned to offer the most discerning traveller a taste of Africa at its best.
A guide will meet you at Victoria Falls Hotel. It is a short drive to the rainforest car park. From here the guide will pay entrance fees to the Rainforest and the tour will then begin on foot, starting with a brief in the information centre 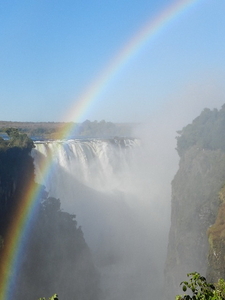 Cape Town is a coastal city in South Africa. It is the second-most populous urban area in South Africa after Johannesburg. The city is famous for its harbor, for its natural setting in the Cape Floristic Region, and for such well-known landmarks as Table Mountain and Cape Point.
Located in downtown Cape Town, within walking distance of the city’s many attractions, the Fountains Hotel and Conference Centre offers all the services and facilities you would expect from an inner-city hotel. The City of Cape Town boasts a wide range of attractions. But when all the exploration, sight-seeing and shopping have worn you out, the Fountains Hotel will accept you with open arms. The reception at the hotel is a welcoming space, furnished with couches to create a relaxation area. Those who would like to keep an eye on the work side of things, can turn to the hotel’s business centre. Located in the lobby, it boasts two Apple computers.
You visit Table Mountain, Castle of Good Hope, District Six, The Bo-Kaap (Malay Quarter), have coffee in the Company Gardens and be there when the oldest tradition in Cape Town is performed at 12.00 – The Noon Gun.
Enjoy the winelands around Cape Town. During this tour you will enjoy the wines and lunch will be at an additional cost. You will drive over Sir Lowry's Pass with a view over False Bay, then Viljoens Pass in the fruit area around Villiersdorp and Grabouw, the Franschhoek Pass again with fantastic views and then Helshoogte on your way to Stellenbosch. A tour you will enjoy from the beginning to the end.
After a hearty breakfast you will be transferred to Cape Town International Airport for your return flight home.

Mara includes:
Meet & Greet on day 1 at 08:00 at the airport or hotel if previously arranged
Transfer from the Airport to the Mara
2 nights full board accommodation at Mara Concord Game Lodge Transport in a chauffeur driven minivan
Services of an English speaking driver-guide
game drives and Lemek Conservancy Fees
All arrival and departure transfers
24 hour emergency contact Guaranteed window seat in vehicle

Victoria Falls Includes:
All transfers between airport and hotel
Accommodation on bed and breakfast basis A guided morning tour of the Victoria Falls (Excludes park entrance fees as these are subject to change)

Cape Town Includes:
Transfers to and from the hotel
Accommodation on bed and breakfast basis
Guided tour of Cape Town with transfers (meals and water excluded)
Guided tour of the Cape winelands including 2 wine tastings (meals such as lunch excluded)